Data explain why West bakes, burns and dries out

The American West is baking, burning and drying in intertwined extreme weather. Four sets of numbers explain how bad it is now, while several others explain why it got this bad.

The West is going through 'the trifecta of an epically dry year followed by incredible heat the last two months and now we have fires,' said University of California Merced climate and fire scientist John Abatzoglou. 'It is a story of cascading impacts.'

And one of climate change, the data show.

In the past 30 days, the country has set 585 all-time heat records, according to the National Oceanic and Atmospheric Administration. Of those, 349 are for daily high temperatures and 236 are the warmest overnight low temperatures, which are vital for people to recover from deadly heat waves.

A different part of Death Valley likely set the world record on July 11 for hottest 24-hour period by averaging the daily high and overnight low to come up with 118.1, according to meteorologist Maximiliano Herrera, who tracks weather extremes.

The average daily high temperature for the entire area from the Rockies and westward in June was 85.7 degrees, which beat the old record by 1.3 degrees, according to NOAA.

Nearly 60% of the U.S. West is considered in exceptional or extreme drought, the two highest categories, according to the University of Nebraska's Drought Monitor.

That's the highest percentage in the 20 years the drought monitor has been keeping track. Less than 1% of the West is not in drought or considered abnormally dry, also a record.

How much moisture is in the soil is key because normally part of the sun's energy is used to evaporate moisture in the soil and plants. Also, when the soil and plants are dry, areas burn much more often and hotter in wildfires and the available water supply shrinks for places like California, a 'true indicator of just how parched things are,' Abatzoglou said.

Both NOAA and NASA show soil moisture levels down to some of the lowest recorded levels for much of the West. Most of California, Oregon, Washington, Nevada, Arizona, Utah and Idaho are drier than in 99% of other years.

There are 68 active large fires burning, consuming 1,038,003 acres, according to the National Interagency Fire Center. With those fires and ones in Canada, there is 'one large area of smoke over much of the U.S. and Canada,' NOAA said recently.

So far this year, wildfires have burned 2.2 million acre, which is less than the 10year average for this time of year. But that may change because dry plants are at extra high risk of burning in much of the West as shown in what experts call fire's energy release component.

How we got here

'The heat wave story cannot be viewed as an isolated extreme event, but rather part of a longer story of climate change with more related, widespread and varying impacts,' said climate scientist Jennifer Francis of the Woodwell Climate Research Center on Cape Cod.

From 1991 to 2020, summers in the Rockies and westward have on average become 2.7 degrees warmer. The West is warming faster than the rest of the United States and the globe.

The weather phenomenon that is roasting the West now and that brought 116-degree temperatures to Portland, Oregon, at the end of June is often called a heat dome — where high pressure parks over an area and warm air sinks.

This usually happens when the jet stream — the river of air that brings weather to places — gets stuck and doesn't move storms along.

Pennsylvania State University climate scientist Michael Mann found the number of times the jet stream stalls in the Northern Hemisphere is increasing from about six times a summer in the early 1980s to about eight times a summer now.

Over the past 10 years, the region has averaged a bit more than 19 inches of precipitation a year in the middle of what scientists call a megadrought. In the 1980s and 1990s, before the megadrought started, the West averaged nearly 22 inches of rain.

A 2020 study said 'global warming has pushed what would have been a moderate drought in southwestern North America into megadrought territory.'

From 2011 to 2020, on average 7.5 million acres burned in wildfires each year. That's more than double the average of 3.6 million acres a year from 1991 to 2000, according to data from the National Interagency Fire Center. It's not just more acres burned, but more 'very very large fires,' said UC Merced's Abatzoglou, noting that the combination of drought and heat means plants are more likely to burn and fires to get bigger.

'The drought we've had this year and the warm temperatures has allowed the fire season to come on hard and really, really early,' he said. 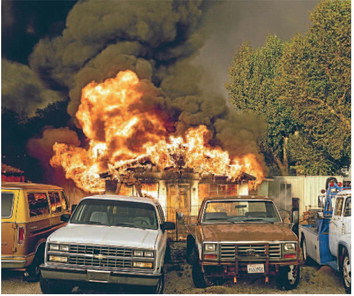 Flames consume a home July 10 as the Sugar Fire, part of the Beckworth Complex Fire, tears through Doyle, Calif. Pushed by heavy winds amid a heat wave, the fire came out of the hills and destroyed multiple residences in central Doyle.

The Los Angeles cityscape is seen behind dry plants July 4 in Los Angeles. While droughts are common in California, this year's is much hotter and drier than others.

Click here to see this page in the eEdition: