An advanced water-purification system developed by Tucson- based Paragon Space Development Corp. is orbiting Earth on the International Space Station after a successful launch of a resupply mission last week, NASA and Paragon said.

Paragon's latest life-support technology — a key to long-duration human space missions like a trip to Mars — was launched Feb. 20 aboard Northrop Grumman's 15th commercial resupply services mission, arriving at the ISS on Feb. 22.

The water system, known as the Brine Processor System, will be demonstrated over a year as an upgrade to the space station's Environmental Control and Life Support System, which provides clean air and water for the crew through regenerative processes.

Once installed in the space station's Tranquility module, Paragon's new system will take fluid from the ISS' current urine-processing system, which can now recover about 87% of water from urine, and further purify it to recover about 98% of water and water vapor on the station — a benchmark NASA says must be met to sustain life over long human space missions. The new Paragon system will work by pumping brine from the spacecraft's urine processing system into a dual-membrane bladder that will pass water vapor into the cabin atmosphere, NASA said. Once in the atmosphere, the water will be pulled from the air using a condensing heat exchanger and further processed for drinking water.

'Understanding the need to squeeze every bit of recovery and 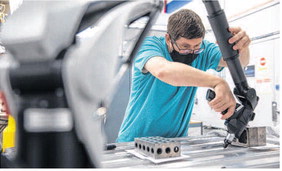 Paragon Space Development Corp. says its life-support technology will be critical to long-duration human space missions like a trip to Mars.

Continued from Page A13

efficiency from systems with energy and space constraints — like any spacecraft — is crucial in deep space exploration,' Anderson said.

Paragon has worked on every major human spaceflight program since its founding in 1993, flying its hardware on NASA's Orion spacecraft, the Space Shuttle and the International Space Station, as well as on the Soyuz and Mir Russian spacecraft, and on commercial spacecraft.

Meanwhile, the design for a new lunar landing system including life-support technology developed by Paragon has passed a key review as part of NASA's program to return humans to the moon.

Alabama-based Dynetics, which leads a team including Paragon designing the Human Landing System for NASA's Artemis Program, said the team's design recently passed its preliminary design review, an important milestone in the space agency's quest to return humans to the moon.

Dynetics said the review demonstrated that its team's preliminary lander design — which includes an environmental control and life-support system deigned and built by Paragon — 'meets all the system requirements with acceptable risk while remaining within current cost and schedule constraints.'

The Dynetics team is one of three vying to build the Human Landing System for the Artemis program, which aims to land humans on the moon by 2024.

Last May, NASA awarded contracts for the lunar lander totaling $967 million to teams led by Dynetics, Blue Origin and SpaceX.

NASA announced in October that all three Artemis HLS teams had successfully passed a 'certification baseline review' and the space agency was expected to choose one or two of the teams to move into the next development phase by the end of January.

But NASA notified the teams on Jan. 27 that it was giving them a two-month contract extension from the Feb. 28 expiration of their initial contracts, without any further funding, before deciding which design or designs will move forward.

Before the most recent preliminary design review, the Dynetics team's design had passed a systems-requirements review, a certification baseline review detailing how the team intends to ferry astronauts to the moon, and a continuation review to help NASA narrow down the most promising proposals.

The Dynetics proposal won the highest marks of the three teams during the certification baseline review.

Click here to see this page in the eEdition: